This is an emergency! It seems that somehow Thorg has taken over Golem.Network. We’re working to address this issue as fast as possible. Our best guess is that Thorg must have gotten annoyed at us for teasing his release for so long. We’re trying to re-establish positive relations with Thorg to resume regular operations as soon as possible.

In the meantime, we’re celebrating just over a week since the Thorg release. Since then we’ve been overwhelmed with the excitement of the community engagement, both inside the Golem Discord and outside. So many people have been getting involved in running Thorg, supporting other users, and general discussion, not to mention Thorg development improvement ideas.

From it, Thorg created a thorg.io Troubleshooting section. There are a few common issues that are great to address for first-time users on their path of downloading Thorg. In conjunction with that, there’s a new Thorg release (v0.5.2)—found at thorg.io or updated through the Thorg application—featuring lots of UX improvements.

The improvements focus on highlighting and describing to Thorg users when there’s a block from the firewall and how to proceed. In addition, making it;

There are still more potential UX improvements and edge cases that Thorg developers already have in their sights that will need to be addressed over time. Alongside, they’re working to make more features available. Thorg is just getting started!

To elaborate on why the antivirus blocks Thorg, most antivirus’ include protections for the regular Windows user to stop them from unknowingly installing software containing a malicious miner. With such malicious software, the person unknowingly running the software will not receive any of the mining rewards. This is a good protection for the average Windows user!

With Thorg, the user is in full control and custody of their wallet. They are fully aware that they are downloading software containing a miner. In other words, Thorg is non-custodial, only you have access to the keys create. Or even better, select an external wallet such as a MetaMask address and payments will go to that wallet.

Again, we apologize for any inconvenience around Thorg taking over the Golem.Network website, we hope that he’s not too much trouble and will look to get the issue resolved ASAP! If you’re on TikTok, tag @minewiththorg and help us work things out.

There’s just been a new update major to Thorg (v0.6.0)! To get the latest update, either update through the Thorg application at the bottom of your dashboard or go to Thorg.io and get the latest release. 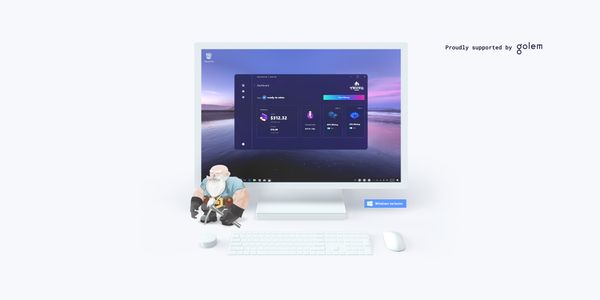 We are proud to announce Thorg - the first mining app powered and built by Golem, with Layer 2 Polygon payments and the easiest onboarding in the market!