When we started thinking about the People of Golem articles, we knew that the Clay one had to be launched with a bit of precaution, as this team shares the name with the next big Golem milestone, and there have been strategic changes to the way Golem evolves.

Since October 2018, Brass Golem has been under a gradual transformation into Clay Golem. This progressive roll-out is the result of the work of many teams, such as R&D, UX, Brass, and of course Clay.

Building Clay is a continuous process with a milestone set for the release of mainnet Task API. However, the Clay team responsibilities go beyond just making sure this roll-out happens successfully. In the next few paragraphs, we’ll find out what Adam Wierzbicki, Gert-Jan Rebel and  Marek Franciszkiewicz are up to, and their upcoming milestones.

Clay Team’s core responsibilities are (in short bullet points, reflecting this is a pragmatic team that doesn't don’t play around with prose):

As all other teams, Clay collaborates with a number of Golem teams, to bring their goals to fruition. Those are:

Now, to our community’s favourite topic: yes, the Clay team is tasked with bringing the Task API to life. Actually, their upcoming milestone is the first release of Task API. This release will consist of a well-defined API, developer tools for bootstrapping and testing their apps and accompanied documentation, including a tutorial.

The testnet version of the Task API will not cover all of current Golem’s capabilities (i.e. usage marketplace and multiple simultaneous gWASM computations). These features will be introduced incrementally, prior to the mainnet release. The testnet Task API release is scheduled for the last months of 2019 and will be launched within our next major release.

After this milestone is achieved, their next big challenge would be to bring the Task API into the Ethereum mainnet. The goal is to release a complete set of features included in Golem core but not available to developers with the testnet version of Task API. Besides fixing any remaining bugs, the team wants to focus on improving developer’s UX and identify more areas in code that can be generalized and provided as a part of the Task API library. Clay is also going to provide an extended version of the documentation and improve on the tutorials.

Last but not least, with regards to the new networking stack, Clay has some news. Some context before this: the PoC of Golem running a rust-libp2p networking stack has been developed some time ago - you can even check the repo with the work done here. Due to the Task API release and recent developments/refactorings in the rust-libp2p library, the works have been suspended. But Golem's not planning to deprecate the core work on our networking stack:

"The plan is in the near future, pick up where we left with the Rust version of libp2p integration, reevaluate the scope of work needed and develop a new networking solution. This new approach will be UX-focused, with the most energy spent on NAT traversal issues." - Marek Franciszkiewicz, team lead

As you might be able to spot, the Clay team is looking into the future of Golem and making sure our next big step, the Task API, is well looked after and has a smooth launch.

We hope you enjoyed getting to know Team Clay - stay tuned for updates! 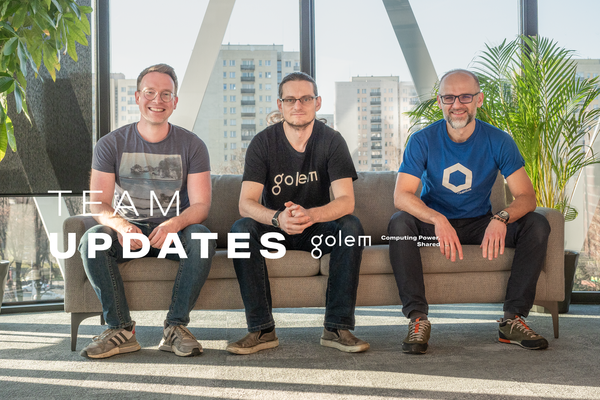 As part of our People of Golem series, the team shares insights on their day to day responsibilities and what makes Unlimited such a cool product.

Building decentralized applications can be easy. In the next paragraphs you will find out how we simplified a previously cumbersome process by launching our latest meta-use case, gWASM.