There’s just been a new major update to Thorg (v0.6.0)! To get the latest update, either update through the Thorg application at the bottom of your dashboard or go to Thorg.io and get the latest release. If you run into any issues, there’s a troubleshooting section on the Usage page of Thorg.io that’s designed to help you with getting started.

What’s new in this Thorg release?

Thorg can now mine Ethereum Classic (ETC)! Up until today, Thorg hardware requirements have been relatively high, requiring a minimum of 6GB VRAM or more on the user’s GPU. This changes today with the introduction of ETC mining.

Hardware requirements for ETC are pretty low gear compared to Ethereum, which Thorg was mining exclusively up until this release. With now just a minimum 4GB dedicated video RAM which most modern PCs are likely to have, you’re able to get started mining with Thorg. The reason why you will need 4GB minimum is that currently, Ethereum Classic's DAG size is a bit over 2.7 GB. So while it might be possible to use 3GB, our tests found that running Thorg on a machine will use slightly more than 3GB. If you do happen to try it on a machine with 3GB of VRAM then it’s good to keep in mind that we consider 4GB and above officially supported.

With this improvement to Thorg, we hope that it will allow as many people as possible to get started easily. Thorg is the first application of its kind, with the fact that it uses a Polygon payment driver to send out payments for the computation.

In future releases, we’re looking to expand Thorg both as an application and as an ecosystem around it. There are some things we have in store so if you’re not already running Thorg we would love for you to try it and get involved in the community. You can tag the Thorg IDs on Twitter and TikTok, or if you’re more for getting around the community then the Discord is where you want to be!

The Beta III release comes with support for Virtual Private Networks between the requestor and provider Virtual Machines and for custom usage counters. 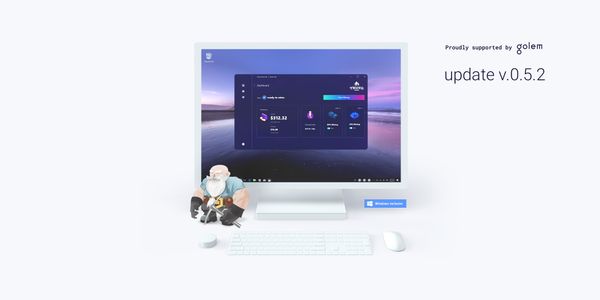 We’re celebrating just over a week since the Thorg release. Since then we’ve been overwhelmed with the excitement of the community engagement, both inside the Golem Discord and outside.