(for those unfamiliar with the quote, it's from A Tale of Two Cities by Charles Dickens - and I felt it was really fitting to TLDR 2020)

This is my third time writing a year in review for the Golem Network. I look forward to this tradition each year, and ‘unpacking’ the various drivers behind our many accomplishments. I think we can all agree that this past year was pretty rough. However, the same inconveniences that disrupted everyone’s livelihood also drove public adoption of the decentralized web and cryptocurrencies. There are many factors at play here: we could be experiencing a technological paradigm shift, or perhaps people are finally waking up and taking ownership of their digital lives.

At the start of the year - blissfully unaware of the trials to come - we knew we were at the doorstep of the biggest year to date for Golem. And I'm not being hyperbollic here - we have had some very eventful years, but this one was the one where we knew we would be evolving all aspects of our project. A "go big or go home" sort of year.

On March 12th, now called Black Thursday, news of the pandemic spread across the world and cryptocurrencies crashed - the most eventful year of our lives was just getting started.

Meanwhile, we symbolically closed the doors of our Warsaw office to go remote for the first time in the history of the project. Before that, relocation had been one of the requirements for joining the developer team at the Golem Network. Within just one month, the team had already learned to adapt to this “new normal” and was efficiently delivering everything on time.

In April 2020, exactly two years from our Mainnet Launch, we delivered the task API, which marked the completion of Clay Golem. Later this year, we unveiled our last use-case for this platform, chemistry computations, which was released on August 6th, and dubbed CHEM@Golem (Clay Golem will be sunsetted at some point, however, CHEM@Golem will migrate to New Golem so there’s no stopping there!)

At the same time we were completing the Clay Milestone,  we were also getting ready to reveal New Golem to the public - executing this launch amidst everything was a big challenge. After 3+ years of working on Legacy Golem, we were eager to share this brand new project with its fresh codebase, so Viggith took the virtual at (pun intended) ReadyLayerOne.

New Golem is a nimble infrastructure for our new platform, which allows us to evolve at the same pace as the rest of the Web3 ecosystem and be always at the forefront of innovation. Our constant search for evolution has impacted everything surrounding the Golem Network: in parallel, we have been working on improving almost every element of our services: from the organization to finding new ways to improve the network, and of course, the token migration.

We initially launched New Golem: Alpha I in August. Followed by the release of New Golem: Alpha II in October, and with it, the first apps were built atop of New Golem - two video transcoders built by the community - and a lot of interesting use-cases. This was completely exhilarating: developers were able to leverage the network to build science, maths, tools and much more! If you want to check out these projects - Awesome Golem is the best resource.

In November we launched the much-awaited ERC-20 migration, and the birth of our new token: GLM. Fast forward to now, GLM is trading on Uniswap, the leading decentralized exchange as well as other exchanges. It’s been slightly more than a month since launch and almost 40% of the 1BN supply has migrated, and we expect to keep on growing!

We released New Golem Alpha III in early December, achieving yet another milestone: the Protocol’s settlement layer was built atop of Ethereum’s Layer 2 (zk-Sync) which enabled the project to scale with ease, bypassing all previous hurdles. To celebrate, we launched our very first Hackathon, which is ending in a week (we’ll publish a full recap on the event at the start of next year!).

Our chat is flourishing with incredible conversations about Machine Learning, distributed systems, decentralized finance, gaming, and other great use-cases. The drivers of such conversations are developers that are not affiliated with the Golem Network, and it’s fascinating to read. These developers, and many more, will dictate the future of the Golem Network and of the inevitable more fair version of the internet that will no longer be susceptible to single points of failure.

With that all being said, I want to close this recap by thanking all the tech pioneers out there: the devs in the Golem Network chat, those that form this ecosystem and the community that supports all of us. Let’s continue building a better tomorrow!

(Stay tuned for more details on what’s in store for the Golem Network in 2021. For now, we’re all eagerly waiting to see the results of these hackathon applications) 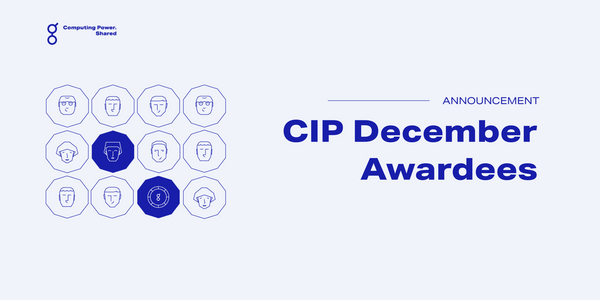 With the Community Incentives Program, we offer rewards for community contributions on a monthly, and bi-monthly basis. This is the December update.

Happy ERC20 Golem Holidays everyone! As you know, on November 19th 2020 we launched the migration GNT -> GLM, and we’re very excited to see the response from