Research projects are always looking for better ways to efficiently uncover interesting finds and maximize results. For the biggest of projects, having unlimited computing power can be a game changer that improves the research process from start to finish. Extensive, world-class research that goes beyond the depths of our imaginations can only go as far as its infrastructure  can carry it,  and the scientific supercomputers that are so often necessary to carry large computations are expensive, allowing for  only a handful players in the world to  afford them  — until a protocol like Golem is brought into the picture.

The Golem Network is fully democratized, granting these initiatives access to resources previously out of reach. Running on top of a network such as Golem, ambitious research can grow with limited restraints.

One example of ambitious research maximizing its potential with computing power is Golem's collaborative project with Allchemy, LIFE@Golem. This is an ongoing mission to recreate billions of chemical reactions and molecular bonds and trace back to the first forms of life on Earth. While similar research projects of this nature have previously been completed, none have grown to this scale — LIFE@Golem is already approaching its tenth generation and the pool of early-Earth molecules being analyzed is already near the billions (previous research has only reached the thousands). By harnessing Golem’s unlimited computing power, LIFE@Golem is able to take this research to entirely new levels, leading to a myriad of new use cases for scientific research built on top of protocols like Golem.

Indeed, while supercomputers have existed for many years, accessing extensive amounts of additional power without a supercomputer is what sets projects like LIFE@Golem apart. For example, The University of Wisconsin Eau Claire recently spent over 700k USD to purchase a new supercomputer to replace their previous infrastructure purchased back in 2014 — a move that was much overdue as the average lifespan of hardware ranges between 4-7 years. On the other hand, traditional cloud providers, who take hardware’s obsolescence into their own hands,  are still costly and allow little room for  flexibility and creative freedoms within their environments.  The potential for researchers to maximize efficiency  and operate at competitive scales is made possible by platforms like Golem, where harnessing and optimizing untapped computing power at a fraction of the cost while giving researchers extreme freedoms is a top priority.

A network built to last

Unlimited computing power isn’t just available to large universities, scientists, and institutions. Anyone can leverage unused computing power to conduct data intensive research and complex computations through the Golem Network. One of the Golem’s most unique qualities is the freedom it provides for researchers to explore the realms of the unknown. Golem is purpose-built to withstand an abundance of web3 projects, from ML, CGI rendering, scientific computing and more, creating an environment for endless possibilities and creation.

One of Golem’s many visions is to empower and democratize innovation for the future of research, providing equal, affordable access to computing power. Golem will continue to partner with more scientific companies like Allchemy to ensure that important missions and projects have the power they need to generate research that will break boundaries.

Want to help us trace the Origins of Life?  We’re doing open calls for providers to join the network. Join our Discord to learn how you too can participate in this incredible project.

We’re back for August's update on the GLM Rewards Program! Each month we offer rewards to the community members that are getting involved in the ecosystem, whether it be in development, support, or interesting projects of their own that they come up with to work on. 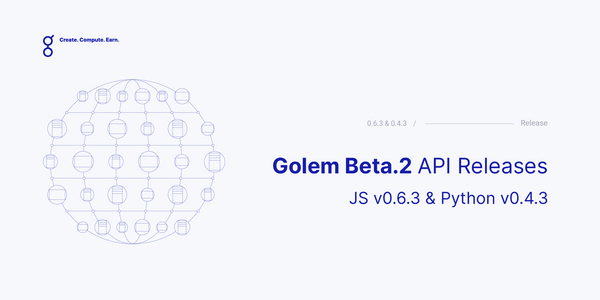 This announcement and releases are for the APIs and is relevant to requestors only. Updates include JavaScript and Python APIs, “433 Eros” Yapapi 0.6.3 and “Alfred Hitchcock” YaJSapi 0.4.3 (respectively).