So, it’s been about a month and a half since our 29-minute crowdfunding campaign, and we’ve been heads-down coding & planning ever since (well, after the champagne fueled celebrations).

We’ve made a few strategic decisions & fleshed out the finer details of the 6-month plan to build Brass Golem (the P2P Blender & Lux Renderer version that will serve as Golem’s first use case and proof of concept), tentatively slated for release in May 2017.

Golem is being built on more than one bleeding-edge technology and our highest priority is to release a robust and fully functional version of Brass Golem. Brass Golem introduces the world’s first sharing economy for spare computing power, and serves as the platform upon which we will build Golem into a worldwide decentralized supercomputer that anyone can program. All while Brass Golem itself takes the CGI rendering industry by storm, making rendering work cheaper & more powerful it’s ever been than before.

So, what are the major updates and decisions we’ve made since Nov 11?

Up till now, the Golem Alpha has been running on our own “private” Ethereum testnet. The coin works much like ETH (besides being valueless), which isn’t ideal since the public release of Golem will run on GNT.

Which is why we’re working towards moving all of the Alpha’s transactions over to tGNT: Test Golem Network Tokens that function exactly like GNT. With this will come the implementation of a Golem client for tGNT, moving all tests over to the Ropsten testnet, and scaling up our testnet.

Much of Golem’s robustness and efficiency will depend on having a p2p network which is agile and reliable. Today the Golem network is small, and so we can still build and test several components without running into scalability issues. But as the network grows, it will be imperative that Golem is able to scale with a diverse network.

Golem depends on Ethereum for transactional aspects, however when it comes to p2p communications, Golem necessitates new functionality.

One of the unsolved problems is efficient and decentralized file sharing mechanism (a kind of decentralized “dropbox”). Current alpha version uses stable, but centralized and temporary solution. We believe that IPFS (Interplanetary file systems) is one of those awesome cutting-edge technologies that Golem should be being built upon. However, we’re dealing with a problems where it sometimes stops working for reasons we don’t fully understand yet.

To address this, we’re running a slew of additional tests to identify and solve the problem, and preparing a fallback mechanism — build into p2p protocol — that will deliver files using a different protocol if IPFS stops.

We will finally be replacing Qt interface with web interface as the software that Golem’s front end is running on.

We’re changing our current interface-client communication method and preparing API specification to allow users to write their own interface-extensions for new apps with more ease. This is not critical for Brass Golem (because there will be only CGI rendering integrated by us in Brass), but it is perspective work towards more advanced versions of Golem.

By the time Brass Golem is released into the wild, it’ll be so friendly that anyone with basic computer skills will be able to get it up and running in minutes.

With a clear development plan in place and secured financing, we’re recruiting!

Three new developers have joined the team so far: Grzegorz Borowik, who’s been with us since November, Dariusz Rybi and Krzysztof Antczak.

Before joining us, Dariusz was a lead developer for one of Poland’s bitcoin exchanges. He’s a wizard at cloud and datacenter technologies.

We need more capable developers to build this thing. Want to join? Let us know here.

Wanna be the first to get Golem updates & early access?

If you want to be the first to know when we make a major update (like scaling up the testnet), and be invited to join potential focus groups & other in-depth chats with the team, sign up to the Golem email list at Golem.Network (scroll down to the end of the page).

You can also download the Golem Alpha and start playing with it!

Alright, we’re back to work. Talk to you next month — and for now Merry Christmas! 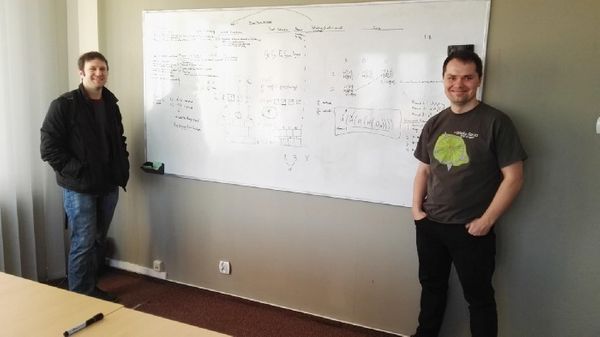 This is a first article in the series exploring and explaining Golem protocol, its goals, development, and solutions. All of this is still a work in progress — done at the

In order to understand the underlying mechanism behind the value of GNT, we should first emphasize the most crucial features of this token and its role in the Golem Network.