Keep in mind that some reports might not fall within the criteria to be included in this Bug Bounty. For general feedback, we also have the GLM Rewards Program with the Feedback category.

We invite our community to join our Yagna Bug Bounty Competition (the “Competition”). Please have a look at the content below before starting your hunt.

The individual reward for which an accepted bounty qualifies will depend upon the amount and quality of all bounties submitted and accepted into the Competition. The bounty pool will be available until June 30th, 2021.

For each bounty application, you will need to submit a separate application via email (contact@golem.network with the subject “BUG BOUNTY REPORT”). The form is simple, quick to complete, and will assist us in determining the fairest way to distribute the rewards (see appendix 1).

By submitting a bounty application, you agree to the terms and conditions set forth herein. We have prepared some examples, so please keep them in mind when considering to participate in the bug bounty that these examples are along the lines of a submission (section E).

Golem Bug Bounty Competition is focused on a wide variety of issues related to the overall security of Golem, in particular (but not limited to) functioning of the Yagna application and the network protocol. For more specifics, please see Section 2: Other variables, Quality of reproducibility.

Please note that the Bug Bounty competition is only subjected to SECURITY BUGS. Also note that the website (https://golem.network/ and blog), local host attacks, Man in the Middle (MitM) attacks and DDoS attacks aren’t covered by this bug bounty.

The determination of a reward to be paid out will vary depending on severity and other variables, at the full discretion of Golem Factory GmbH, using the guidelines set forth below.

We will be following a standard in Risk Analysis and OWASP risk rating for our analysis for reported bugs:

Critical/High: up to 11.900 USD (or USD equivalent), limited to bug bounty pool

Golem Factory GmbH reserves the right to change the above rate without prior notice and without the possibility of recourse. Please also note that since this guideline is non-binding, USDC allocations are in the end determined at the sole discretion of the bug bounty team of Golem Factory GmbH and all reward decisions are final.

In addition to severity, other variables are also considered when the bug bounty team of Golem Factory GmbH determines the reward to be paid, including (but not limited to):

We’ve prepared a list of examples to help you get started on your bug bounty hunting. The bug bounty program is not purely limited to the examples below but rather a list to guide you in the right direction on ideas on what you could hunt for.

Golem Bug Bounty Competition is an experimental and discretionary reward program aimed at encouraging and rewarding improvement of Golem. By participating in the Competition, you acknowledge that Golem Factory GmbH can cancel the program at any time, and rewards are paid at the sole discretion of the bug bounty team of the Company. In addition, the Company is not able to issue rewards to individuals who are on the US, Swiss, European (or other) sanctions lists or who are citizens of sanctioned/embargoed countries (eg. North Korea, Iran, Syria, Cuba, etc). The transfer of a reward thus may be made subject to a prior and successful KYC-check of the participant. All recipients of any bounty tokens are responsible for all taxes under their respective jurisdictions and situations. All rewards are subject to applicable law. Finally, your testing must not violate any law or compromise any data that is not yours.

Any disputes arising out of or in connection with the Bug Bounty Program shall be exclusively decided by the ordinary courts of the city of Zug, Switzerland and in accordance to Swiss law.

Note: Golem Factory reserves the right to reply to bug bounty messages in a period of more than 24 hours. We are reading everything, yet have to prioritise some reports over others. 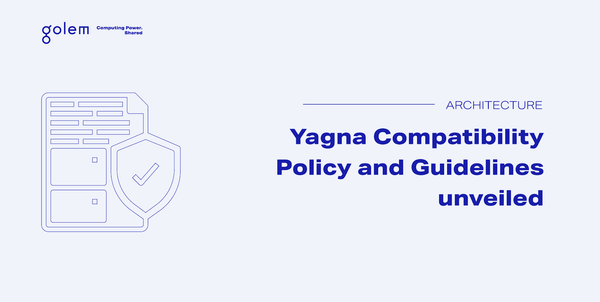 The Compatibility Policy is a document which declares Golem Factory’s promises regarding software package versioning, compatibility and deprecation patterns.

we reached out to two of the hackathon projects in order for them to port their work to Golem mainnet: Chess on Golem and Golem SLATE, DeML (Decentralized Machine Learning)