This year has been an interesting one for anyone interested in the future of the Web for many reasons, but this last weekend showed us a vision of a near-future Internet hell. The Mirai botnet DDoS attack on Dyn, and its predecessor attack on Brian Krebs’ site show that our current centralized Internet infrastructure is not a sustainable platform. We need a more robust, decentralized internet if we don’t want these events to define this era of the Web.

The opportunity to build a better Internet, with technology like Ethereum and Golem, is an exciting one. The problem to date with Ethereum projects, and until recently, cryptocurrency in general, has been from the development side: most projects are tech-first, user-second, or put another way, technological answers to questions users didn’t actually have. And for potential users, there are multiple barriers to entry — from simply understanding the benefits of the technology to requiring special browsers, syncing huge blockchains, and all the other usability issues.

What is needed is a sharp focus on making products that are a pleasure to use, and then communicating their values clearly and simply, in plain language. This is of course the role of the product designer, but we are fairly under-represented in the Ethereum world. Perhaps this is because Silicon Valley is the current centre of gravity of the product design world, or perhaps because Ethereum has yet to catch the imagination of a critical mass of designers. To me, the promise of Ethereum seems clear, and Golem in particular seems set to play a key role in spreading the value of a decentralized worldwide supercomputer. But to win, it will need to integrate seamlessly into our daily workflows, as well as get its message out to potential users who will be judging it not on its merit as a cryptocurrency project, but just as another digital product amongst many.

I’ve been involved with cryptocurrency since 2013, and have been running my own product design studio since 2014. Prior to that I’ve worked at various design studios in Australia and Japan, with a background in brands, digital and print design. Taking complex ideas and technology, and making it comprehensible to and usable by anyone is what I aim for as a designer.

Digital products are the tools we’re building the future with, and it is essential that we have the best ones possible. Some of the things I’ve designed have included a simple bitcoin wallet, a WebVR platform, a site to explain the complexities of Counterparty (and also one to explain Bitcoin), a site with exploding hamburgers, a proposal for a token-controlled social network, a multi-token digital wallet, and some other things.

It is with pleasure that I can announce I’ll be coming on board to help Julian and his team on the Golem project. I look forward to help shaping it into a great product — with the goal of moving toward that better Internet. 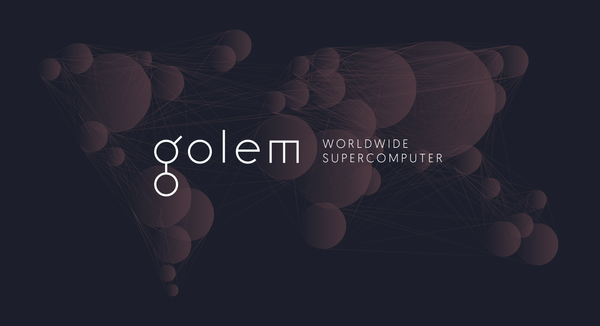 This post was created to explain what Golem is & why it’s awesome in a way that is understandable to everyone. You don’t need to be a blockchain

We are pleased to present today, the next version of our crowdfunding whitepaper. We have taken all community feedback into consideration, and we consider this version to be our release candidate. The refreshed whitepaper is available here. But before diving in, please allow me